Community & Connection, The Most Essential of Services

During March and April, more than 15 members of the Runaways Run Club completed a F(ans of) U(nlimited) K(udos) 55K ultra-marathon, solo. Double that number completed the F@ck Corona Run Club challenge, featuring 10 “races” ranging in distance from 1K to 10K. During May and early June, many club members are exploring nearby towns, cities, trails, and local landmarks to complete the Tour de Maine challenge, still solo. Day after day, the running community continues hitting the trails and the pavement, despite a non-existent race season, and cancellation of group runs and gatherings. The lack of in-person motivation and encouragement has been taxing for many. Navigating this new, isolated way of running left us seeking connection, and ultimately led to us finding motivation in the aforementioned virtual events, in group virtual workouts, and in some inspiring competition!

Now, as we’re only a few weeks away from resuming our group runs (adhering to state and city guidelines), Mari Balow, co-leader of the Runaways Run Club and Portland Sweat Project reflects on how we managed to stay connected during the COVID-19 pandemic. 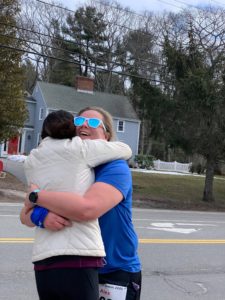 Connection is at the heart of everything we strive to do. I have a strong drive to provide a space in which connections can happen and flourish. Personally, I had spent a whole lot of years running solo, being insecure and intimidated by the idea of Keeping Up With A Group, and while I accomplished a bunch of goals (first marathon, first 50K, first half), I wasn’t fulfilled or inspired by doing things for myself, by myself. When I first connected with the November Project, I immediately realized I’m a better, happier human when I’m striving with others, sharing the journey, the effort, the joy, as well as the pain. And, so important to me, it’s free, and available to anyone who chooses to show up. Three years ago, when I met Ken, Chris, and Shannon, I saw the same motivation in The Runaways, and I was 1,000% on board. I think this holds true for most everyone who comes to a run or workout. I hear it constantly, “I was so inspired by XX, that I went out, and I ended up doing so much more than I ever thought I could.” “I’m not a morning person, but I show up so that I can spend time with these people.” People keep showing up to the group runs or workouts, not always because they want to run or workout, but because they want to connect with, and be inspired by, everyone else who shows up.

Now, with COVID-19, these connections we’ve invested in and built are more important than ever. We need the support, inspiration, and encouragement provided by our social structure. Especially in the times when we are not running or sweating in the same location as a group, it is essential that we are sweating separately, but together, and all of the same motivations still apply. It’s crucial that we are finding ways to nurture our existing connections, to keep them consistent and reliable. To encourage and motivate each other from a distance in really meaningful ways. Social media fatigue was a real thing, but “social” media is having a resurgence, now that we’re otherwise unable to gather together. It’s amazing the boost you get seeing the faces and hearing the voices of the people you have invested sweat equity with, and who you know have your back and support you, even if it’s through a screen. It’s incredibly uplifting, and in a time of insecurity and uncertainty, absolutely an essential service.

Mari Balow is co-leader of the Runaways Run Club, the Portland Sweat Project and is an integral part of organizing group runs, as well as The Grind Co’s Firebird Trail Festival.