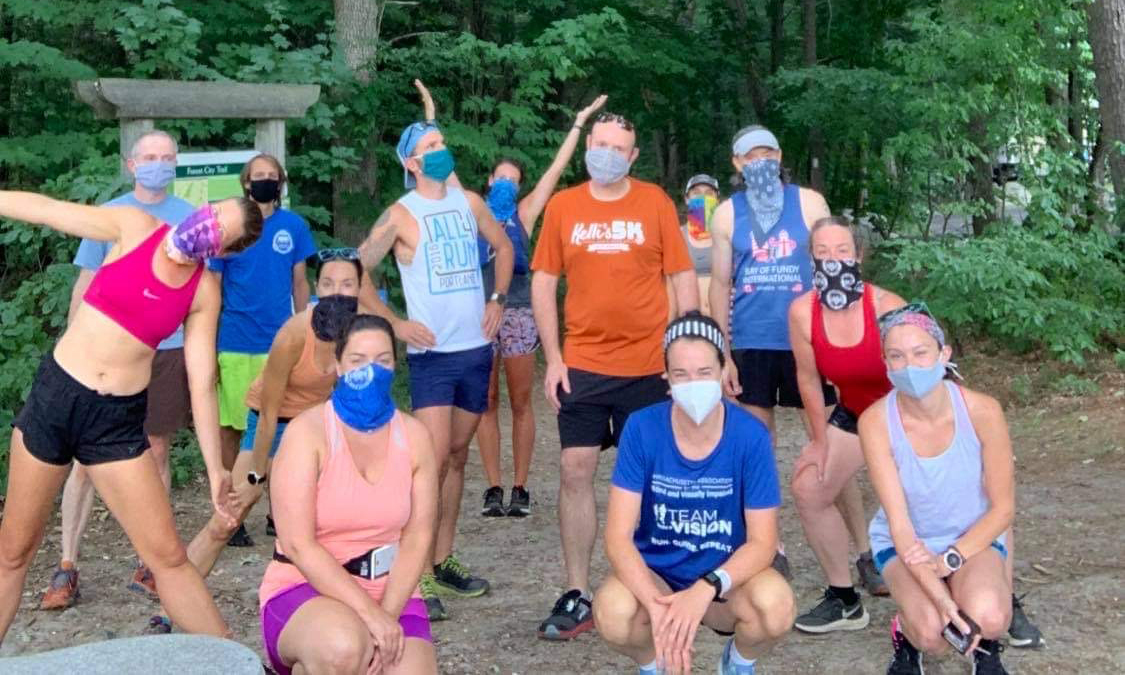 “Shirts!” “Skins!” It instantly conjures up sultry heat, sweat, and pick-up basketball or soccer games, as common as ice cream in summer. It’s also almost exclusively male territory. Men tend to pull off their shirts in public spaces with little thought, and seemingly no repercussions. That’s not to say men aren’t body conscious, they certainly are, but it’s a different awareness. Men generally don’t get catcalled, openly stared at, followed, groped or told that they “must have wanted people to look.” So it makes sense that there are few topics among women more charged and emotional than the decision to run or workout in only a sports bra – or not to. The decision is deeply personal. The ability to strip down while working out is a hard won battle for some, but holds less weight for others. For some it’s purely functional, for others, it’s all about body type/athletic ability (and whether they feel they have the right one). No matter the decision, nearly all women have valid reasons and experiences that have made them feel less than comfortable, and overall, less than their male counterparts.

Hildegard
I’d always felt like my body belonged to other people. My figure was often remarked on as a “white girl” with “African curves”. At gyms men and women would approach me and comment about my curves or more specifically my ass. If I lost weight there would always be someone who would say that I was busy losing my signature feature. Other people would say that I’m lucky to have a small waist so at least I can hide my big bum with belts and skirts. 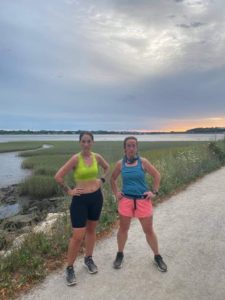 I moved to Maine from South Africa at the beginning of summer 2019 and although the hot and humid weather was a nice surprise, my first run in it was horrible! I mean, I was from AFRICA, but I had never felt this hot in my life. I couldn’t believe how sweaty I could become with nothing evaporating because of all the moisture already in the air. My shirt was drenched and I hated it! Then I started noticing some of the local women running in their sports bras. And what was more surprising and refreshing was that some of those women didn’t have “perfect” stomachs. These women were in control of their own bodies and more importantly their own comfort.

Since then, I’ve slowly been working on reclaiming possession over my own body. My body is not a display for others and I do not have to justify my big ass and my small waist or anything else. I don’t have to hide any part of it, and I can wear whatever makes me comfortable. And for me, running in a shirt in humidity is truly unbearable.

Lindsey
I run in a sports bra because when it’s hot, I don’t want to be hot. Simple as that. It took me a long time to feel comfortable in a sports bra running and get to a mindset of “look what my body can do” instead of “why don’t I look like xyz,” which many women know is a HARD mindset to let go of. Luckily I run in areas I feel safe in, but do experience a few catcalls here and there; I’ve learned to flip them off and keep running. So, as long as the weather keeps being hot, I’ll keep running in a sports bra!

Mari
For so many years, I’d see women running in a sports bra, and feel a mixture of admiration, self-loathing, inadequacy, envy, and somewhere, a tiny kernel of determination. 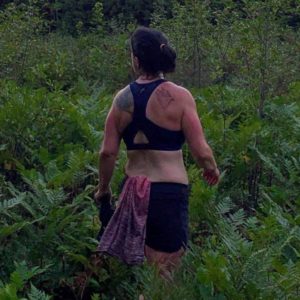 All the apologies: I’ve had two kids, my skin isn’t taut anymore, maybe it never was. I’ve always had very generous handfuls of boob and never really got comfortable with exposing that. I’ve never seen myself as an “athlete,” (i.e. as someone who gets a free pass to run half unclothed.) I’ve never been afraid for my personal safety, in fact as hard as this is to admit, my knee jerk is still a slightly sulky “guess I’m not sexy enough to get cat-called” (how fucked up is that, anyway?!) and I’ve never perceived myself as sensuous or sexy. It’s been a slow journey over the past ten years, and now that I’ve begun to really dig into, and embrace, the strength of my body, I’ve been just fine with running in a sports bra. I’m still not taut. But I am an athlete, I do get to run half naked, I don’t need permission, or adulation. My body is my best friend, it carries me far, I take care of it, I treat it, I show it off, I feel strong, and therefore, confident. I’m still working on a few of those apologies, but that’s ok. Running in a bra isn’t the reason I’m confident, it’s the expression of my confidence.

Alexia
On occasion I will run in just a sports bra if I’m solo or comfortable enough in a group setting, but it doesn’t happen on the regular. As freeing as it is, it exposes the part of me that I’m most self conscious of, my stomach, and wearing a shirt hides this insecurity. Part of me worries that people are going to judge the loose skin that moves while I run, the other says it’s my body and they don’t have to look if they don’t want to.

Learning to be comfortable in my own skin has been a learning process, but each day it gets easier. A year ago I raced in my sports bra for the first time with 1000’s of people watching. Knowing they weren’t looking at my stomach, but rather my strength for completing a triathlon, gave me the confidence boost I needed. I know I’ll never be 100% comfortable running in just a sports bra, but this was a step in the right direction.

Deirdre
I always want to run shirtless, but barely ever do without feeling so self conscious because of my stomach’s flabbiness – and I don’t know why. I’m very active, pretty strong, and as a certified group exercise instructor/personal trainer, I think people expect me to have a solid six-pack abs. But I don’t. I have three kids and we enjoy summer activities, like eating ice cream almost daily (that’s a summer activity, right?!). However, I will admit, the higher rise waist of most bottoms, does give me the confidence to possibly wear just my run bra!

Shannon
The first time I ever ran in just a sports bra I was groped. It was at the tail end of a group run, and I was running alone through Portland’s Old Port, when some guy took advantage of the crowded busy sidewalks and grabbed my butt. I was shocked and horrified and ashamed. I blamed myself for thinking that it was a safe choice to run in such an exposed outfit, especially alone. It’s been a process to feel comfortable in just a sports bra, but it always makes me feel empowered. I feel strong and badass, even knowing that my exposed skin is moving and not picture perfect – and it’s way more comfortable in the heat.

I ran the last miles of my first 50k in just a sports bra. I felt such a high coming into that finish line, and I love having those pictures to look back on – even the not so picture perfect ones, because it’s real. It’s the body that got me to the finish line. My husband proposed to me at the finish line of that race, and my proposal photos all feature my malleable stomach (admittedly my most often self-scrutinized body part). So do many of my wedding photos. It took some inner monologue work to love those photos for the beautiful moments they captured and not fixate on the parts I’d like to “fix” but ultimately I am so grateful and proud of this body that it (and all bodies!) deserve showing off. 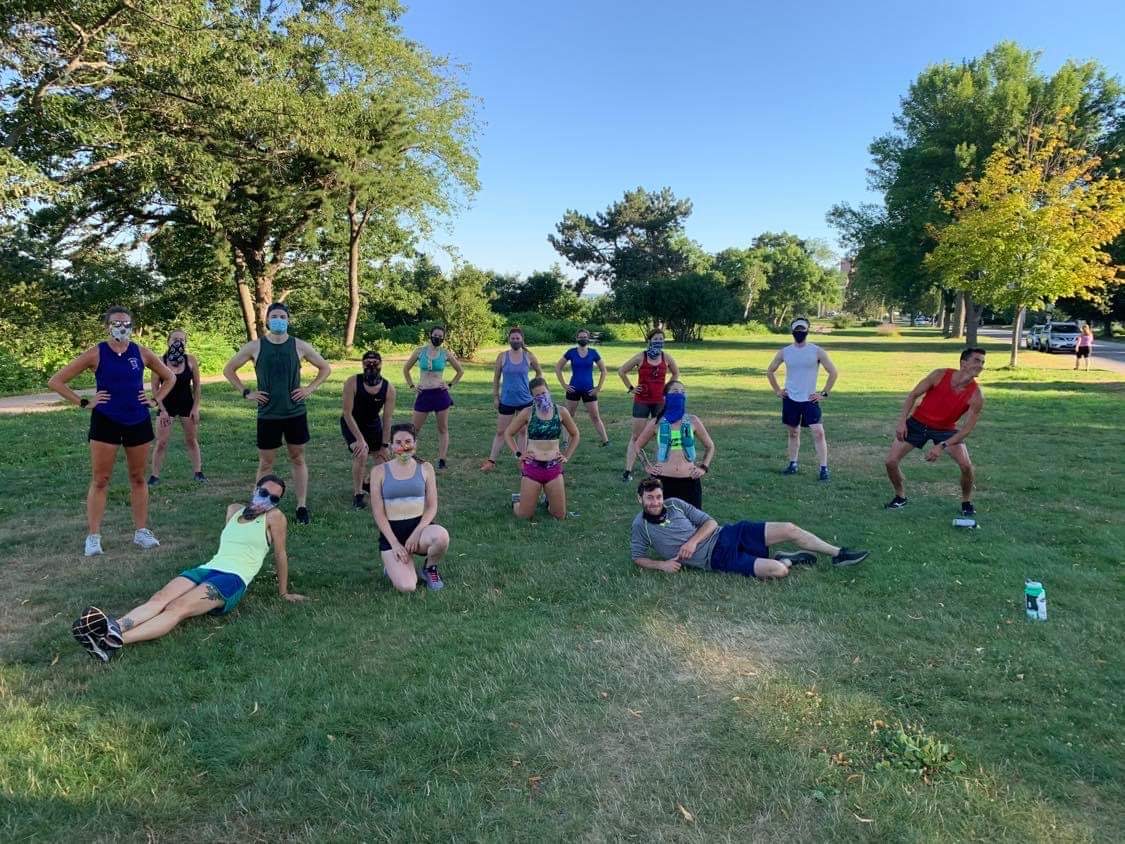 Women’s bodies are inextricably bound to internal and external concepts of beauty, worth and youth, while also deeply wrapped in social stigmas. Fully clothed or not, we’re often considered a threat, a temptation or too desirable. Covering up is the socially acceptable signaling that you’re a safe, non-threatening woman – a team player, a “good” girl. Safety is a real factor, because it’s not just women who are affected by these unrealistic body images and expectations. Many men have never been taught to see women as functioning independently of men – functioning as athletes who aren’t competing against boys, but just competing. Hence the shameless catcalling. There’s seemingly no comfortable place to inhabit as a woman without a shirt – if you’re athletic, you’re not feminine enough, if you’re too feminine, you’re wanton, attention seeking, or weak and require protection. Being comfortable showing up in public in just a sports bra is taking back space we have always owned – that space is our own bodies. We’ll know it’s ours again when “Shirts or Skins!” conjures up a feeling of freedom and inclusiveness, whether you’re shedding the shirt, or not.